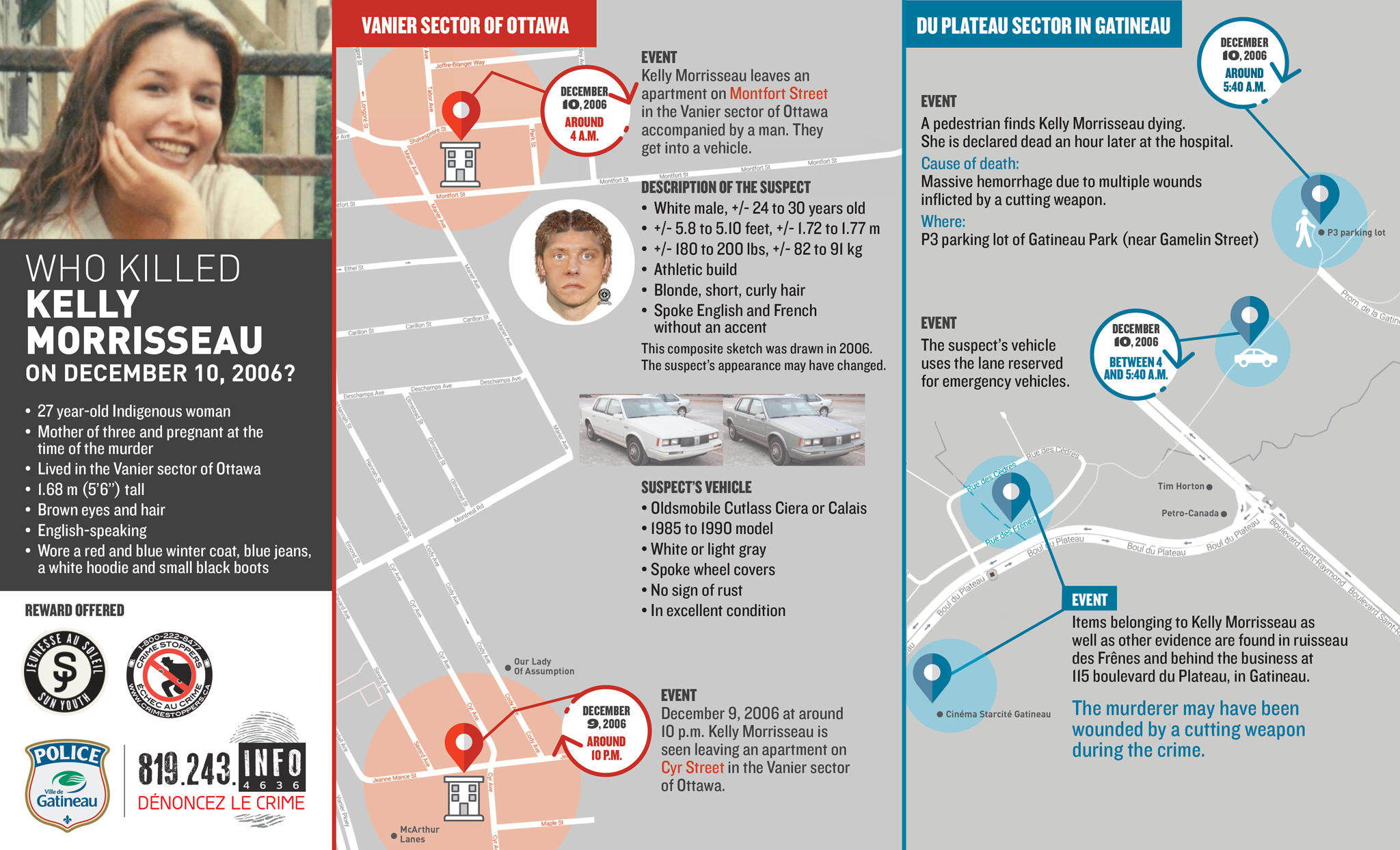 Gatineau, December 7, 2016. – The Service de police de la Ville de Gatineau (SPVG) this afternoon unveiled new evidence in the December 10, 2006 homicide of Kelly Morrisseau. The media event took place in the P3 parking lot of Gatineau Park, which is where the 27 year-old woman was left for dead almost 10 years ago. Kelly Morrisseau, a mother of three, was several months pregnant at the time of the murder.

In order to ensure that this horrific event does not slip from the collective memory, and in an effort to spark the memories of potential witnesses, the SPVG re-created the key chronological and geographic evidence from the hours leading up to the crime. As well, two organizations, Sun Youth and Crime Stoppers, are jointly offering a $12,000 reward to anyone who provides information leading to the arrest and conviction of the person responsible for this murder.

According to SPVG spokesperson Sergeant Jean-Paul LeMay, "This extremely violent homicide hit our entire community, as well as Kelly Morrisseau's family in the Winnipeg area, where she came from. Thanks to the advances in investigative and scientific techniques, and collaboration by residents facilitated by social media, we remain hopeful that we will solve her murder. In fact, a number of new leads have been investigated and checked over the past few years."

Recap of the facts

- Kelly Morrisseau was last seen alive on December 10, 2006, around 4 a.m. on Montfort Street in the Vanier sector of Ottawa. At that time, she was 27 years old, the mother of three and pregnant.

- She was with a man, and was seen getting into his car, possibly a 1985 to 1990 Oldsmobile Cutlass Ciera or Calais.

- That man remains the main suspect in Ms. Morrisseau's murder. A composite sketch was released a few months after the crime, based on information received from the public and through investigations. The suspect's appearance may have changed over the years.

- The suspect vehicle and the individual in the composite sketch may have been spotted in the Vanier sector in the days leading up to the murder.

- According to evidence gathered during the investigation, the victim and the suspect probably met up to exchange sexual favours. The suspect may have solicited other women for such favours before or after the murder.

- Between 4 and 5:40 a.m. on December 10, 2006, the suspect vehicle used the lane reserved for emergency vehicles between Promenade de la Gatineau and boulevard Saint-Raymond. That reserved lane no longer exists, and is now a bike lane or path.

- Any resident who may recall having seen the suspect vehicle or any other vehicle not identified as an emergency services vehicle that morning should contact police.

- Kelly Morrisseau was found dying by a pedestrian on December 10, 2006 around 5:40 a.m. in the P3 parking lot of Gatineau Park (near Gamelin Street). She died shortly thereafter from a massive hemorrhage due to multiple wounds inflicted by a cutting weapon.

- The autopsy revealed that Ms. Morrisseau fought back forcefully. In fact, the murderer may have been wounded by the cutting weapon at the time of the crime.

- Items belonging to Kelly Morrisseau and evidence were found in ruisseau des Fręnes (near boulevard du Plateau) and behind the business at 115 boulevard du Plateau in Gatineau. Thus, the suspect drove around in that sector, and likely stepped out of his vehicle more than once in the early hours of December 10.

Ten years after this dreadful event, there are people who still have information crucial to this investigation, who never contacted the police for fear of being identified or that their information may not be relevant. The police is asking everyone to step forward, reminding them that the information they provide will be treated as confidential, and that, where in doubt, it is always best to pass it on because even a small detail could help the investigation.

Information can be called in to the SPVG crime hot line at 819-243-INFO (4636), option 1. Witnesses can also call the National Capital Region's Crime Stoppers line at 613-233-TIPS (8477) or 1-800-222-TIPS (8477) anonymously. Finally, information can be provided by filling out the form accompanying the composite sketch on the SPVG Web site at www.police.gatineau.ca.